On April 2, 2008, the City Council adopted Ordinance 5439, amending Chapter 9.40 on the Municipal Code and changing the name of Advance Financed Districts to Reimbursement Districts. 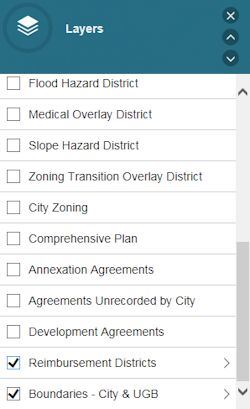 Reimbursement District Fees are paid by the property owner at the time the property benefits from the improvement, typically at the connection to the sewer, water, or storm drain system, or when seeking an expansion of 50% or more of the size of an existing development, or obtaining a new development permit. The amount of reimbursement to the installer is based upon a prorated share of the cost of the improvements divided by the frontage and total acreage of properties in the Reimbursement District.

Annual simple interest from the date of adoption of the specific AFD Ordinance is calculated and imposed at the time fees are paid. Reimbursements are delivered to the developer for a period of fifteen years after the execution of the Advance Financing Agreement. If the District was formed by the city (public), then reimbursements are collected in perpetuity.

Please contact Community Development at 541-450-6060 to verify what fees may be required.