COVID-19 Information OHA "How to Find a Vaccine" Page Read On...

Grants Pass was named in honor of General U.S. Grant’s 1863 victory at Vicksburg, Originally Grant’s Pass, the apostrophe was dropped after 1900.

Grants Pass was a stagecoach stop in the 1860’s. It became a rail head when the Oregon-California Railroad (now Southern Pacific) was completed in 1884.

It is the Josephine County seat. The county is named for Josephine Rollins Ort, who came to the Illinois Valley with her father in 1851.

Hudson Bay Trappers were the first white people to travel through the Rogue Valley. The Rogue Valley got its name from what settlers and trappers called local native tribes. The natives were called "the rogues," because they fought for their rights.

The brothers Jesse and Lindsay Applegate were part of a band of settlers traveling the Oregon Trail from Missouri. At the Columbia River crossing, they tragically lost their young sons and the raft carrying all their belongings. They vowed to backtrack and discover a safer route which would avoid the deadly river.

Beginning at Fort Hall, Idaho, the brothers forged a new trail through Nevada, California and eventually through the Rogue Valley. The trail was on the south side of the Rogue River and crossed at Fort Vannoy about 5 miles west of present Grants Pass.

The Applegate wagon train of emigrants made the first wagon tracks through the Rogue River Valley, heading toward the Willamette Valley.

A party of emigrants discovered gold in the Jacksonville area. Their find drew a large number of prospectors seeking their fortunes. Traveling with the party was Josephine Rollins Ort, the namesake of Josephine County.

Sailors deserted their ship near Crescent City to travel toward the Jacksonville gold fields found by Ms. Ort's party. Before they got there, they discovered rich deposits in the Illinois Valley just 25 miles south of the present Grants Pass, which came to be known as "Sailor Diggin's."

Sailor Diggin's quickly became an important mining center with a population of several thousand. This center eventually became Grants Pass. It was later renamed Waldo to honor William Waldo, the brother of Daniel Waldo, who was a prominent figure in early Oregon history.

In 1858, many miners left for new discoveries on the Frazier River of British. Nothing remains today of the many mining towns that sprang up in the Illinois Valley.

Wars between the Native Americans and settlers broke out in the 1850s. Troops from Fort Jones, California and local volunteers fought the natives. In 1855, a peace treaty was held on the Illinois River, near Agness. The battles continued. When they were defeated, the Native Americans were moved to the Siletz and Grande Ronde Reservations on the northern Oregon Coast.

The gold, and the completion of the Oregon-California Railroad lead to rapid growth, bringing miners, farmers, lumbermen and other tradesmen to Grants Pass.

In 1874 a local hunter, Elijah Davidson stumbled upon an underground cave system when his dog disappeared into the side of a mountain while chasing a bear. These caves are now known as the "Oregon Caves." The first road to the caves opened in 1904.

By the 1890's Grants Pass had its own opera house. The Grants Pass Water, Light and Power Company generated power at a dam a few hundred feet west of Caveman Bridge. At the time, the first of several bridges crossed the Rogue River near 5th Street.

In 1894, Mary Peters "Indian Mary" applied for squatters' rights for land on which her father, had built a cabin on the hill overlooking Hellgate Canyon.

Her father, "Umpqua Joe," had been an Indian scout during the Rogue River Indian Wars. She was granted a 25 year deed and formed the smallest Indian Reservation in the United States. Josephine County eventually converted the land into what is now Indian Mary Park. 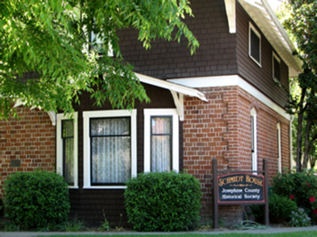