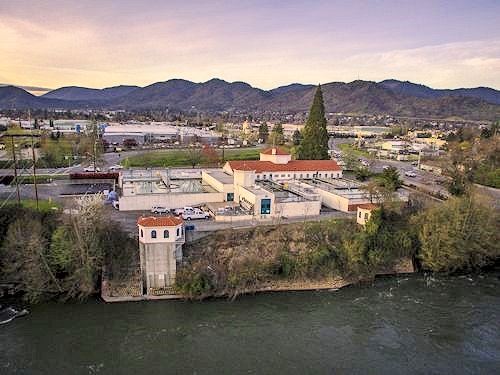 At its January 15, 2020 meeting, the Grants Pass City Council vote to acquire property for a greatly needed new Water Treatment Plant.  The 9.97-acre site is located near the intersection of SE J Street and SE Mill Street.

Replacing the existing plant has been a top priority. With the location now set, construction can begin as early as 2021.  The goal is for a new Water Treatment Plant to be producing high quality drinking water by the winter of 2023.

Knowing the need for replacement, the Council wisely planned for this investment.  Like the City’s early leaders from 90 years ago, they sought to minimize impacts to the rate payers while providing high quality water.

In addition to the upgrading to new century standards, a new design and the nearly 10-acre location provides improved security.  Other features include backwash handling facilities and a stormwater pond.  In thinking about future generations, the City Council also wanted to ensure the new site was large enough for expansion should there be additional City growth or changes in regulations that might require additional treatment facilities.

Why Does the Plant Need to be replaced?

The water treatment facility has been identified as one of the oldest existing water plants still in operation in the state of Oregon. Well past its projected lifecycle, the ability of the plant to reliably deliver water to the community is becoming increasingly more challenging and expensive.  In addition to its age and deteriorating structures, the facility layout, and access create security concerns.

After learning of the significant operational issues and receiving reports the plant would be unable to provide safe drinking water after damage from an earthquake, the City Council made replacement of the aging plant a number one goal.

Some have wondered why a new plant couldn’t be built where the existing one is.  While this location has been fine, the City will need to keep delivering water from it until a new plant is fully on-line. There is not enough room at the current site to accommodate new buildings without removing the old ones and significantly disrupting service to Grants Pass residents. In addition, building at the current site would cost more, take a longer time to build, create the biggest risks to current services, and could not accommodate any long-term future expansions.

The City has retained a third-party owner’s representative (Stantec) to facilitate the replacement process and assist in the many decisions that need to be made before construction can begin.

A design-build firm is expected to be retained in 2020 with final plans submitted by 2021 and construction to begin immediately thereafter.